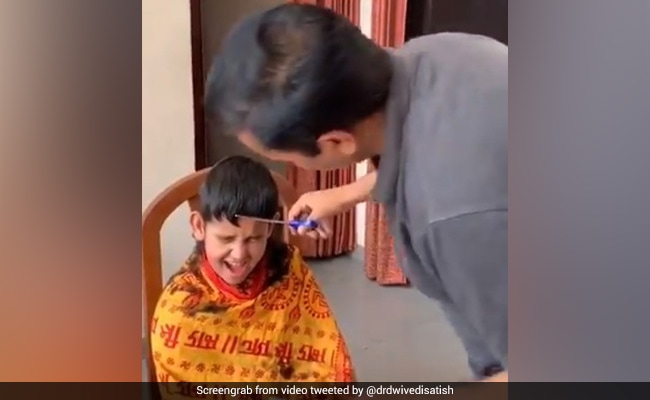 Satish Dwivedi, the minister of state for basic education, said the video was made by his wife.

With India under a total lockdown and salons out of bounds, a Uttar Pradesh minister is trying his hands on a pair of scissors to hairdress his children. But is that an easy skill to develop?

Satish Dwivedi, the minister of state for basic education, said the hair of his son and daughter had grown long and messy.

“And I decided to do hairdress them. It did not go well for my four-and-a-half-year-old daughter, Sukriti.”

“However, by the time I was gearing up for my eight-year-old son, Kartikeya, my hands were fairly set,” Mr Dwivedi said.

A video of him doing the hair cut of the children has gone viral on the social media, drawing a number of reactions.

“The video was made by my wife to show this act to my family members and relatives when I was busy cutting the hair. Later, when I saw the video, I shared it,” the minister said.

Asked how the children reacted to the new skill he has developed but not yet perfected, the minister said they were happy. “I was apprehensive but the children were happy. In fact, my daughter said ”no problem father”. The son did not want his hair to look weird but now he tells everyone he got a haircut from his father.”

About his daily routine at home, Mr Dwivedi said it begins with yoga and watching Ramayan on TV. “After this, I speak to workers of my assembly constituency Itwa. Since March 24, I have been connecting with people daily from 11 am to 12 noon on Facebook Live. Then it is time for Mahabharat.”

Then again from 1 pm to 6 pm, he remains in touch with the people of the district. “People of Siddharthanagar, especially the labourers who are in Ludhiana, Pune, Mumbai, Bangalore, Hyderabad and other places, call up and narrate their problems. The location and phone number of a person among the callers is noted and shared with the nodal officer appointed for the respective state by the UP government and their problems are redressed,” the minister said.

Towards night, Mr Dwivedi, also the in-charge of Sonbhadra district, seeks the day”s report and feedback from officials and party-office bearers.