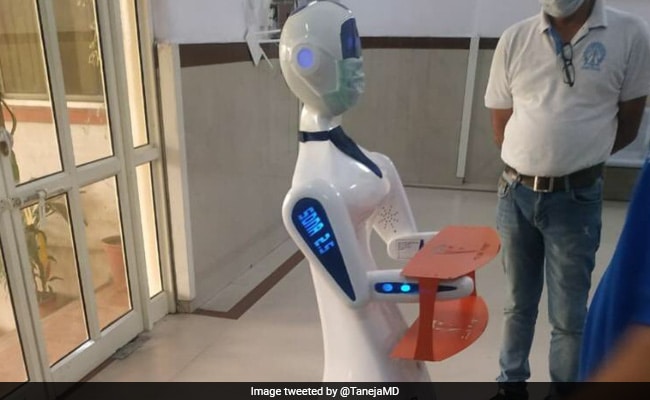 The robot has been made by the company named Club First.

A government hospital in Jaipur is putting a robot through its paces to see if it can help in the fight against coronavirus, delivering food and medicines to patients admitted.

If the trial works out, the humanoid robot could make its way to assigned patients with a tray carrying food or medicines. Potentially, this would reduce the chances of the hospital staff contracting the infection.

SMS Hospital superintendent Dr DS Meena said a private firm had approached them, offering a robot which could carry food and medicines to patients, a job normally done by the nursing staff.

“We are conducting a trial and a committee has been formed to see its efficiency,” he said. The committee will submit a report.

Robot made by the company, Club First, have also been tried out at restaurants, the firm said.

The robot at SMS Hospital uses Artificial Intelligence (AI) and Internet of Things (IoT) to do its job. It doesn’t need to follow lines on the floor and can navigate its own way, according to developer Bhuvnesh Mishra.

It can supposedly use the lift and reach a particular bed in a specific ward. When it starts running out of power, it heads towards the charging point, the manufacturers claim.

Dr Meena called it a good step. Doctors and the nurses have higher chances of getting infected with the virus, he reminded. According to him, the nursing staff likes the idea.

Mr Mishra told PTI that the company provided the robot under its corporate social responsibility (CSR) initiative, and can supply more of them.

“We have manufactured the robot under the Make in India initiative in Jaipur,” he said.

From Michelle Obama To Melania Trump — The Devolution Of The FLOTUS