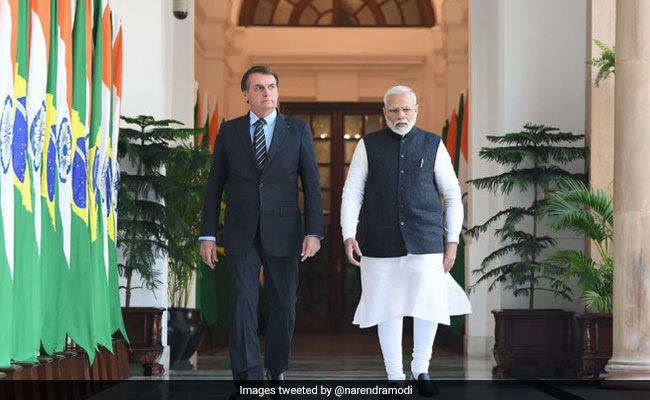 Prime Minister Narendra Modi said this morning that India’s partnership with Brazil was “stronger than ever in these challenging times”. The Prime Minister was responding to a comment by Brazil President Jair Bolsonaro thanking “the people of India” for allowing export of raw materials to continue production of hydroxychloroquine, an anti-malarial drug believed effective in the treatment of the novel coronavirus.

“Thank you President Jair Bolsonaro. The India-Brazil partnership is stronger than ever in these challenging times. India is committed to contribut(ing) to humanity’s fight against this pandemic,” PM Modi tweeted in response to a post by Mr Bolsonaro.

Thank you President @jairbolsonaro. The India-Brazil partnership is stronger than ever in these challenging times.

India is committed to contribute to humanity’s fight against this pandemic. https://t.co/uIKmvXPUo7

Brazil has reported more than 18,000 cases since the COVID-19 outbreak began from China’s Wuhan district in December last year. The number includes at least 173 deaths linked to the virus.

Hydroxychloroquine, currently being tested on 1,500 COVID-19 patients in the United States, has been indicated as a possible treatment option. In a daily briefing on Thursday the Union Health Ministry said it could be used by doctors and medical staff treating novel coronavirus-positive patients.

India manufactures around 70 per cent (approximately 20 crore tablets of 200 mg each) of the world’s supply and, on March 25, banned export until domestic reserves are considered sufficient. The government has reported nearly 6,000 active cases with at least 199 deaths linked to the virus.

On Tuesday the ban was lifted, for the United States after President Donald Trump warned of “retaliation” if India did not allow sale of the drug. The government subsequently said it would allow the export “in view of the humanitarian aspects of the pandemic”.

Mr Trump responded Wednesday: “Thank you India and the Indian people… Will not be forgotten”.

India has also sent supplies of the drug to Israel. The package reached Tel Aviv within days of Israel Prime Minister Benjamin Netanyahu reaching out to PM Modi.

This morning PM Modi responded to Mr Netanyahu as well, writing: “We have to jointly fight this pandemic. India is ready to do whatever is possible to help our friends”.

We have to jointly fight this pandemic.

India is ready to do whatever is possible to help our friends.

Praying for the well-being and good health of the people of Israel. @netanyahuhttps://t.co/jChdGbMnfH

Opposition leaders, including Congress’s Rahul Gandhi and Shashi Tharoor, have cautioned against exporting a potentially life-saving drug without making sure there is enough for the country’s needs.

Former Congress chief Rahul Gandhi had reacted to Mr Trump’s warning, tweeting: “Friendship isn’t about retaliation“. “India must help all nations in their hour of need but life-saving medicines should be made available to Indians in ample quantities first,” Mr Gandhi said.

Worldwide more than 16 lakh people have been infected by the novel coronavirus, so named because it has not been previously identified in humans, and over 95,000 have died.

THE GATE ACADEMY, Bangalore Receives Splendid Response From GATE Aspirants & Semester Students After the Launch of Their Free Coaching Initiative During the Lockdown